shared_ptr - basics and internals with examples

An introduction to shared_ptr's basics and internals through examples.

The C++11 std::shared_ptr<T> is a shared ownership smart pointer type. Several shared_ptr instances can share the management of an object's lifetime through a common control block. The managed object is deleted when the last owning shared_ptr is destroyed (or is made to point to another object). Memory management by shared_ptr is deterministic because the timing of a managed object's destruction is predictable and in the developer's control. Hence, std::shared_ptr brings deterministic automatic memory management to C++, without the overhead of garbage collection. Here is a basic example of shared_ptr: 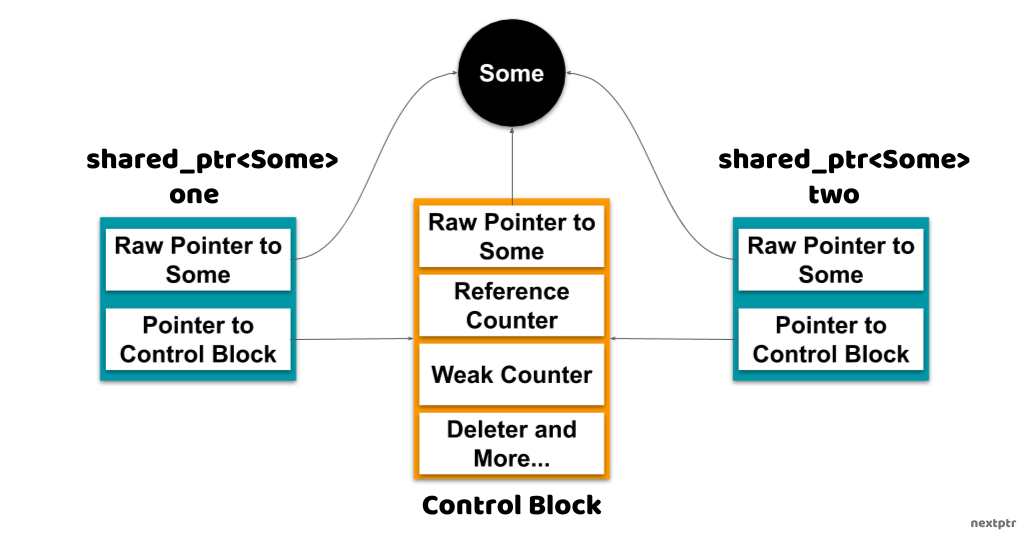 Next, we talk about the details of the most relevant parts of the control block. You would see that the memory layout of shared_ptr can deviate from the above illustration depending on how it is constructed.

A control block contains a pointer to the managed object, which is used for deleting the object. One interesting fact is that the managed pointer in the control block could be different in type (and even value) from the raw pointer in the shared_ptr. This leads to a few fascinating use cases. In the following example, the types of the raw pointer and the managed pointer are different, but they are compatible and have the same values:

The inheritance example above is rather contrived. It shows that despite the destructor being not virtual, the correct derived class (B) destructor is invoked when the base class (A) shared_ptr is reset. That works because the control block is destroying the object through B*, not through the raw pointer A*. Nevertheless, the destructor should be declared virtual in the classes that are meant to be used polymorphically. This example intends to merely show how a shared_ptr works.

The in-depth treatment of aliasing constructor deserves its own space. I encourage you to check out "Aliasing constructed shared_ptr as key of map or set" for a more persuasive use case.

There is more discussion about the managed object pointer in the 'Deleter' section below when we talk about the type erasure.

Let's explore another example that exhibits the lifecycle of an object managed by a few shared_ptr instances. As you go through the code, refer the following figure for the different stages: 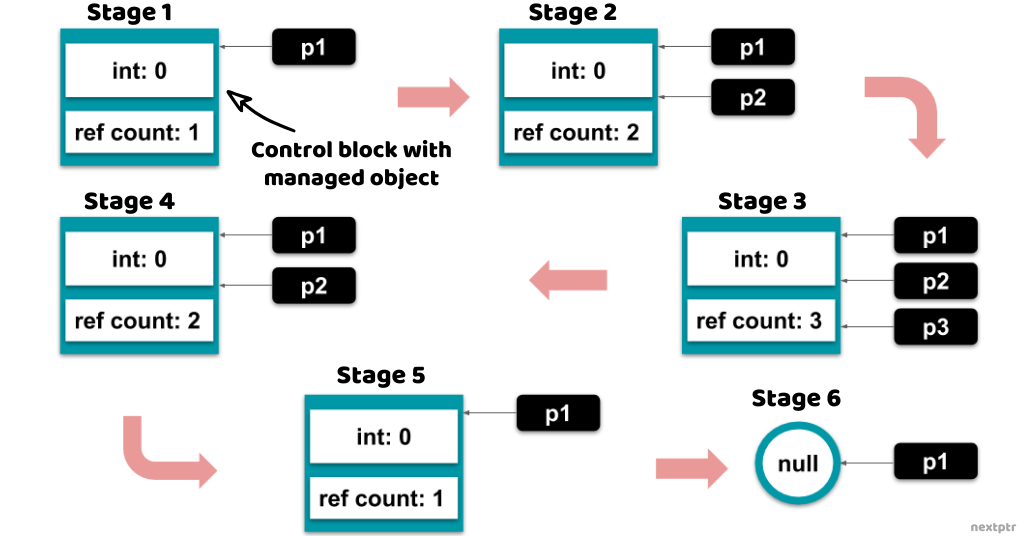 The weak count is the number of existing weak_ptr. The weak count does not play any role in deciding the lifetime of the managed object, which is deleted when the reference count reaches zero. However, the control block itself is not deleted until the weak count also reaches zero.

When a shared_ptr is initialized with a pointer, its control block contains a deleter function object (or function pointer), which is invoked to destroy the managed object. If a custom deleter is not provided to the shared_ptr constructor, a default deleter (e.g., std::default_delete) is used that calls the delete operator.

The deleter is type-erased for two reasons. First, a deleter is an optional argument to a shared_ptr constructor, not a template parameter. Hence, a shared_ptr's type is deleter agnostic. Second, a deleter is a function object (or a function pointer), e.g., function<void(T*)>. This indirection makes shared_ptr independent of the details of how the managed object is deleted. This loose-coupling of shared_ptr with the deleter makes it quite flexible. For instance, in the example below, a vector<shared_ptr<T>> can be in its compilation unit entirely oblivious to the knowledge of how an incomplete type T is deleted:

The std::shared_ptr<T> is a handy yet straightforward utility. But under its simplicity lie extensive details that make it work. Dereferencing a shared_ptr is nearly as fast as a raw pointer, but constructing or copying a shared_ptr is certainly more expensive. Nonetheless, for most applications, this cost is reasonable for automatic memory management.