std::shared_ptr is a shared ownership smart pointer that allows us to access and manage an object's lifetime safely. Multiple instances of shared_ptr control the lifetime of an object through a shared control block structure. A control block maintains a reference count, a weak count, and other necessary information to manage the object's existence in memory.

A new control block is created when a shared_ptr is constructed or initialized with a raw pointer. To ensure that an object is managed by only one shared control block, any additional instances of shared_ptr to an object must be produced by copying an already existing shared_ptr to that object, e.g.:

We can obtain further shared_ptr instances through an existing weak_ptr too, but we will talk more on that later.

Initializing a shared_ptr with a raw pointer to an object that is already managed by a shared_ptr creates another control block to manage the object, which results in undefined behavior. For instance:

Instantiating more than one shared_ptr from one raw pointer is a programmatic oversight with severe consequences. Use std::make_shared (or std::allocate_shared) wherever possible to lessen the likelihood of that error. After all, you are unlikely to encounter this kind of code unless someone intends to shoot themself on foot:

However, there are situations where a shared_ptr managed object needs to acquire a shared_ptr to itself. We would see a more compelling example of that situation in the next section. But first, an attempt like the following to create a shared_ptr from this pointer would not work for the above-described reason:

Why shared_ptr from 'this'?

Below, a Processor receives some data from a Client class that holds a shared_ptr to it:

An Executor is a threadpool that encapsulates a number of threads along with a task queue and executes disparate callables from the queue.

In Processor::processData, we need to pass a callable or a lambda to the Executor for asynchronous execution. The lambda calls the private method Processor::doProcessAndSave that does the actual processing of data before saving it to a database. Therefore, the lambda needs to capture a reference to the Processor object itself; we could do so by capturing this pointer:

However, a Client is free to trash or reset the shared_ptr to its associated Processor anytime for various reasons, which might destroy the Processor. Therefore, the captured this pointer could be invalidated anytime before or during the execution of the enqueued lambda.

We can avoid the above described undefined behavior by capturing a shared_ptr to the current ('this') Processor object in the lambda. A Processor will stay alive as long as an enqueued lambda holds a shared_ptr to it.

The following illustration shows what we want: 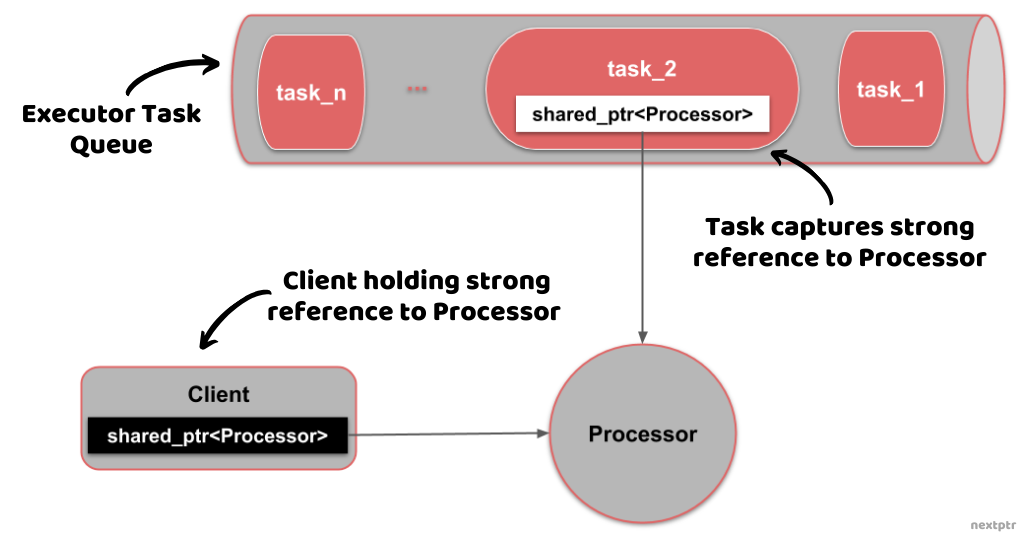 However, we know that naively creating a shared_ptr<Processor>(this) would not work.

What we need here can be accomplished through weak_ptr. A weak_ptr is a weak reference that does not affect the managed object's lifetime, yet can be used to obtain a strong reference when required. If an object keeps a weak_ptr to itself, a shared_ptr can be acquired from that when needed. Here is a naive implementation of our idea:

The above implementation is naive because it has many limitations. We need to make sure that the weak_ptr to self is initialized when a Naive is constructed; therefore, the construction of Naive must be constrained to only through a static factory method.

This solution imposes too many restrictions on design for a reasonable requirement. Nevertheless, this implementation sets the conceptual framework for the standard solution - std::enable_shared_from_this.

A typical implementation of std::enable_shared_from_this<T> is a class that only contains a weak_ptr<T> field (commonly called weak_this):

A few more trivial details regarding the std::enable_shared_from_this are noteworthy here. One, weak_this is declared mutable so that it can be modified for const objects too. Two, the shared_ptr is declared as a friend so that it can access the private fields (weak_this).

Here is another basic example to illustrate how it is all tied up. The code that initializes a shared_ptr<Article> below is intentionally split into two steps to demonstrate the two stages of creation and initialization of the embedded weak_ptr<Article> (see the image following the code):

The following image illustrates the above two steps of creation and initialization of weak_this in the Article object: 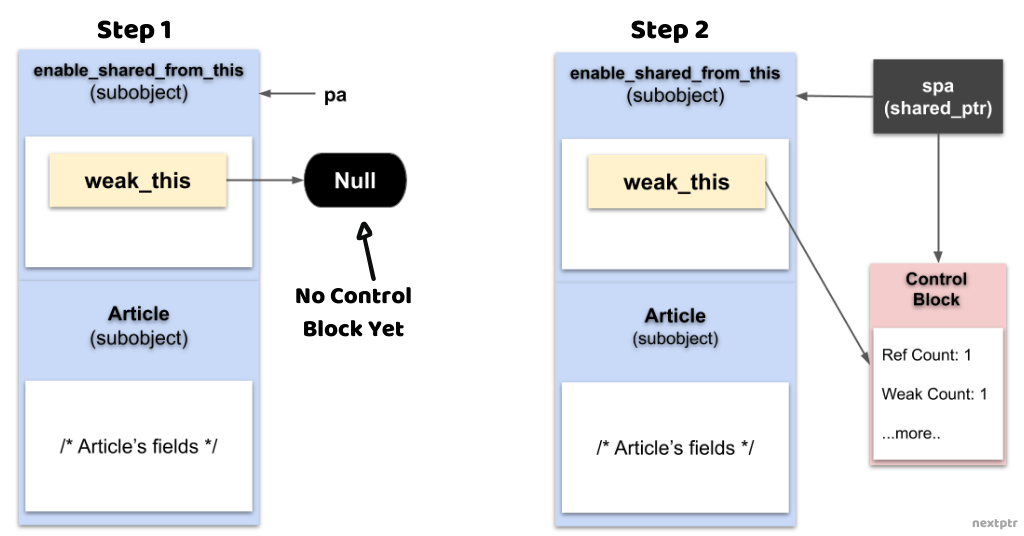 The exception is thrown by the shared_ptr's constructor when it is invoked by shared_from_this on an uninitialized or expired weak_ptr.

One more example of std::bad_weak_ptr is when shared_from_this is called in a constructor because the embedded weak_this is not yet initialized.

Another, very subtle and hard to pinpoint, case of std::bad_weak_ptr is when a class does not publicly inherit std::enable_shared_from_this and shared_from_this is called. Private (or protected) inheritance prevents the initialization of the weak_this and that could go unnoticed without any compiler warnings. For instance:

There are environments where the exceptions are disabled or avoided. For those situations, there is an alternative to shared_from_this since C++17.

The C++17 standard added weak_from_this() method to std::enable_shared_from_this, which returns a copy of the embedded weak_this. A shared_ptr can be safely acquired from that weak_ptr without any possibility of std::bad_weak_ptr, as follows:

A class T that publicly inherits an std::enable_shared_from_this<T> encapsulates a std::weak_ptr<T> to itself that can be converted to a std::shared_ptr<T> when needed.

Read More on shared_ptr and weak_ptr